Crushed under your own success. 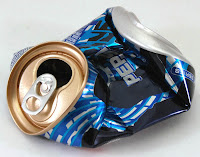 I've done it, you've done it, in fact I doubt if you could find a person who hasn't always based the intrinsic value in nearly everything they've owned or trusted in, mostly, if not solely on what its price was. I mean, a $5,000 watch may not be 10 times better than a $500 watch, but you KNOW it's got to be significantly better, right? Maybe. The downside to that way of thinking is that we sometimes value things too much in either direction. If very expensive things are very worthwhile and effective, then free things are not. Right?

Wouldn't it be great if you could cast off that value system once in a while, stare directly at whatever it is and make a value decision based solely on the merits of what you're investigating at that moment? Sure it would. Many people did, when they discovered craigslist. All of a sudden, something free was nearly as good as those sites that charged for ads.

Then, as word of mouth spread, volume increased, bringing in more and more visitors and ad posters and it became even MORE valuable than the ones you had to pay for and the entire value system went careening off of the tracks, crashing into a massive train wreck of valuation dichotomy. In fact, it worked so well that pretty soon it worked TOO well. Then you couldn't squeeze your way on in most cities with a gun! Then it started running into a valuation wall. Suddenly poor Craig was paying so much in bandwidth bills that his site became nearly all free. Anybody who has had a plan and then had everything change can imagine what he went through over the period. He had to start charging for certain ads in certain cities to pay the bills. Then Ebay paid a huge chunk of cash for a piece of it and there were most likely connotations that from then on a solid profit would have to be maintained. Pretty soon it became a real company running under a .net address. The Jeanie was out of the bottle and the 'yippie-free-always-for-all' idea was crushed under the pile of bills on craigs desk. You can almost see the moment, can't you? I am serious here. Just to get through these periods means that Craig Newmark is a tough person.Kudos.. really.

When life hands you lemons, you setup a lemonade stand and make some money! Now, Craig has a MOSTLY free site that brought in an estimated $100 Million in 2009, according to the AIM Marketing Group. Imagine the surprise when the basic concept of an all free, no limits, community based online classified network proved that with a little tweaking, (AND making people pay out the nose for some ads, while others got theirs for free) you could make over $12,000 and HOUR? (note: that's about $200 per minute, or $3 and per second, 24/7/365)
Anyone who surfs that site for any time knows full well the woes of those who run afoul of the ad flaggers that prowl cities on craigslist. Even worse are when your ad gets ghosted. Ghosting is when some community watchdog (usually a direct competitor of yours) flags your ads, for any reason, more than once. Your IP address and other info will get recorded somewhere in the computers and ban you. If you call and complain hard enough, they will let you back on to post ads... but in most cases, you are just ghosting ads. The computer will log your ad as placed, but when you go to look at it on the site, it won't be there, like a Ghost. (get it) Read the story about a man who got ghosted on craigslist by clicking here. Hey, he's not kidding! Can you imagine having to work that hard to post a free ad? It's a sign that the system is OVERLOADED and maybe just broke. It's only life support system is running like a top right now, in that those who are paying $75 for an ad in some cities just don't have any other free ad sites that are as effective at the moment that charge less than $75 an ad? (I'm joking, but that really is what it is when you look at it.)

Couldn't you use a different place to post free ads? One that was a little more localized when you needed and still national when you didn't? One that just figured you could post ads until the cows came home and really didn't leave it up to third parties with their own agendas to decide who's ad was bad and who's was good. Or who's ads were free and who's weren't? On craigslist, your own local competitors ARE the community and can flag you off the site. Click here to read about one of many cases where it happened, and still happens every day on there.

In fact, this newsgroup discusses many of the problems CL is having anymore. It was one of the reasons why I decided to build sellfreeusa.com. If this many people were not happy with the current market offerings, it was time to build an alternative. So, here we are, wide eyed and innocent... waiting for all of you to come and make us grizzled veterans. If there were a better place to post free ads, get tons of hits and responses and sales, without all of the associated hassles, couldn't you see the value in it? Sure.. who couldn't?

Should it be so far fetched to actually have a better free classified ad site come along than craiglist? No, it shouldn't? Thus the entire, well thought out, planned far in advance model that is sellfreeusa.com. Built to be free always to the users and able to grow as big as you can grow it, always... AND designed so that it should support its own financial weight in page sponsorships as those server volumes rise. We make no bones about planning to profit off of sellfreeusa.com someday. It's designed to and no one should be shocked when and if it does.

More importantly... we WON'T hide the fact that we are profitable, if and when we do. I promise you that. In fact, whenever any page in any city is producing enough ad income to support itself, that page will be clearly marked as such, with a note that you should thank the sponsors on that page for making it happen. It's called capitalism, thought of by a guy named Adam Smith. Smith was an 18th Century educator and wrote The Theory of Morale Sentiments, which was the basis of what America's founding fathers used to create this Country's economic system. Look him up.

Sorry to put so much in one post. It was a lot of info, and I hope you stuck with me. Once again, though.. I want to say again that i am a fan of Craig Newmark and CL. Without his efforts, the internet would not even be the Internet we know today. So, sellfreeusa.com is free and free things have no value compared to things that cost alot, right? Not according to Craig Newmark.. and not according to us. So, if you love craiglist AND hate it too.. maybe you're the person we built this place for? Why not? You like free stuff like us too... right?