"Hasn't someone already done that?" 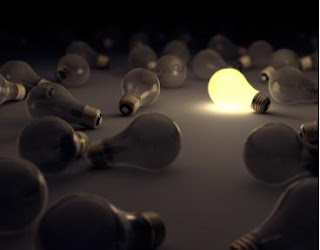 Whenever you get an idea for a business, a website, a project of any kind, you can always test the concept by just asking the question, "wouldn't it be cool if... " to anybody. If 90% of them agree with you, but also comment that someone is probably already doing it, then you may have a winner on your hands.

Though I have never been able to find the original book I read it from, I always remember the story someone told about Thomas Edison and an invention he once had. Whether it was the lightbulb itself, I do not know but the story basically went that Edison had invented something really original and extraordinary, but he lacked the funding to develop it further before going forward with the patent process. He made an appointment with the president of his bank to come take a look at the invention, in hopes of securing a loan.

When the banker arrived the next day, Edison showed him this incredible invention and asked for a loan to develop it further, to which the banker replied, "I have to admit that you've got something there, but don't you think that someone has probably already thought of this?"

Another great story about how people sometimes miss the point of something new was a church in Wales in the 1960's. The vicker of the church knew that there was an old man in his congregation who had never had much money. It was common knowledge that the man didn't even have electricity in his home on the edge of town and when the old mans birthday was coming, the Vicker went secretly to other members of the church and gathered donations to put electricity in the old mans home as a gift.

Money was paid, electricians did the work and the entire church showed up at the old mans home to see the magic of electric lights come to his house. As the sun set, the Vicker asked the old man to try out his new electric light. The man got up, turned on the light switch, which lit his little kitchen up brightly. Then the old man walked over to a cabinet, got out a box of matches, lit his old karosene lamp on the kitchen table, put the matches away, shut the light swith back off and sat down. "Thank you all very much. Now lighting my lamp at night will be much easier!"

The point here is that you sometimes have to remember that people don't get new ideas right away and that is natural. We all live in our own world with our own walls and borders and concepts. As well, someone who doesn't take the time to differentiate two things that appear to be the same on the outside will often miss out on great things.

We know that there are many online classified sites out there and that many of them are free. But, we have a lot of big advatages over them and we hope that people take the time to think about us before they miss out on maybe the greatest thing in free online ads they've ever seen. We just hope that you see what's so special about sellfreeusa.com and just keep telling others about us as well. Sooner or later, they will run out of matches and just leave the light on.

Posted by Craig and Melissa Hull, sellfreeusa.com founders at 1:48 PM