What would you choose?

We've always planned that someday, someday down the road, when sellfreeusa.com was growing large enough, we would take a good part of revenues and give cool stuff back to our members. Mind you, this is still a ways off! We are still in the infancy phase of this great new company, but the what ifs keep rolling around the office and we wanted to get some of our readers input on what they thought.

This chapter will concentrate on what vehicle you would most like to win. We've tossed around green cars, trucks, muscle cars and all sorts of things, but we've narrowed it down to three choices. We would like to hear your thoughts on it. You can help us choose what we will be giving away when sell  free usa gets large enough to support it. 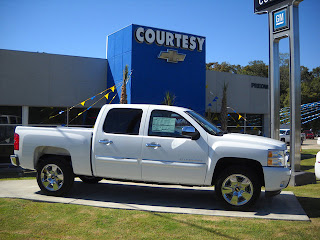 This is Craigs personal choice, probably because I drive one and i know that they are a great truck. The four door cab is handy and it would appeal to the largest amount of people. Plus, with some cool custom sellfreeusa.com paint graphics and some 22" wheels added on, it would be one cool machine to give away.

At the same time, it doesn't have that wow factor that some people think a giveaway vehicle needs to have. Still, everytime I see the truck and think of the concept, this one is my favorite. 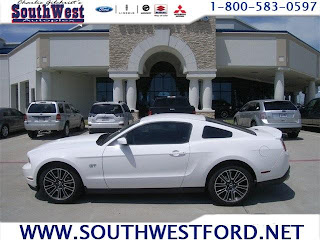 I like this car too. Though I have never been a Ford guy, Melissa and I rented a new Mustang while on a trip to Florida and after a week of driving it, I kind of fell in love with this car.

I like the idea of a killer high horsepower giveaway car, Mike Martin, our resident custom shop owner could really come up with a cool Sellfreeusa.com theme for the paint and custom wheels for this car are as vast as the ocean. If the price were a lot less than the Chevy truck, it would be a lock, but they actually price out to be about the same money. Thus, the concept of letting our readers choose their future prize giveaway car. 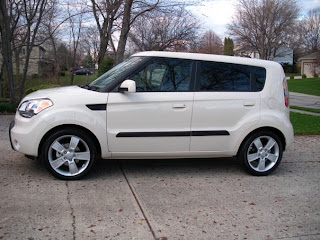 I know! It's not a big old truck and its not a monster muscle car, but dang its cute! AND we figured that at 2/3rds the price, we could give away 50% more of them. So I guess it comes down to quality or quantity on this one. Would you rather have a chance at winning less Chevy trucks or Mustangs or more Kia Souls.

Just imagine this little puppy with some big wheels, cool blue sellfreeusa.com paint scheme and a thumpin' stereo! Like i said, that's why we're putting it here. We really want to get your input on future giveaways and finding out which of these three vehicles you would rather win is a start.

Once again, we are a long way away from this. But as the sites grow and revenue comes in, we ARE going to take 50% of revenues and promote the sites. Our thinking is, what better promotion than to give away a cool car in a cool place along with other cool stuff. More about the location and other ideas in coming blogs. right now, just send me an email and vote on the sellfreeusa.com vehicle you would like to see us give away. Email me at craig@sellfreeusa.com and just put truck, mustang or kia in the message line for your vote.

Posted by Craig and Melissa Hull, sellfreeusa.com founders at 4:53 PM