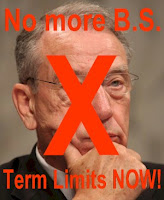 Someone asked me what my politics were today.... My response was... Term limits, new roster, start over... someone stop this madness.

Seriously, what is it going to take to get people to understand that the basis of all of our current problems rests with incumbent Senators and Congressmen and Women who get to stay in office for DECADES and soon become so enamored with the lifestyle that they become government power 'crack addicts' who would kill their own mothers for one more term?

I am ranting today as an American. I am angry as HELL because of the prostituting of all that made America great. I see the world that Washington, Jefferson, Franklin, Lincoln and even FDR and Truman tried to build, deteriorating at our feet because of only one very important fact. We are allowing our elected officials in Washington to get waaaaay too used to the lifestyle, way too in entrenched and way to powerful to do us any good.

Why am I qualified to say this more than anyone else? Well, I used to own a manufacturing company in Iowa that my brothers, my father and I founded. We all started as average Iowa boys, all working hard, late on one payment or another and happy to be alive. We then decided to start building an item that apparently was popular. So popular in fact, that our little enterprise swelled to nearly 300 employees and nearly $50 million a year in revenue. So, yes... I did live fat for a while.

But, as many companies did over the last twenty years, we lived and survived only at the whim of a world gone mad. Raw materials prices and oil swinging wildly from one extreme to the other, followed by social and political upheaval from horizon to horizon, regardless of where you live.. Terrible things all counteracted by quick thinking and good relations with customers, bankers and employees.

It cost me a marriage from the stress, it cost me thirty years off of my life, probably and it cost me friends and family that I would never have dreamed I would have lost, but now, in 2010, I sit without a company, 300 people unemployed and probably a chapter 7 somewhere in my future because of only two things. One; I assumed, like many before me, that time would work it all out, therefore I still lived too well and didn't knock my corporate and personal debt down, like my grandfathers (who both lived right through the great depression) would have... and Two; because my Nations capitol is filled with people who really don't give two damns about you, me or whether we actually live or die.

"How can you say that, Craig?! Our elected officials are there because we ELECTED them! It's the will of the PEOPLE!"... Not true. Many of those people, like Tom Harkin, Chuck Grassley and others (I use Iowa as an example, because I was born here and still live here.) are only here because WE let them be here!"

In 2008, in an attempt to help cure the problems that my company was facing, due to the housing crisis, I flew to Washington for the first time for one reason. I flew there to talk face to face with my elected officials and see if they couldn't tell me where I should turn or what I should do to make sure that, not only my lifestyle wouldn't be effected, but to see if I couldn't find a way to stave off terrified (YES, terrified!) bankers and save the paychecks of nearly 300 hard working, dedicated people, who counted on myself and my brothers weekly to feed themselves and their kids.

I was greeted by three things.. obscene shows of power by nearly all of my elected officials. Opulent offices, hordes of 'aides' and 'assistants' and a total lack of concern of actually correcting the issues at hand. Seriously! If you saw Chuck Grassley's office, you would be shocked.. Russian mobsters don't have digs that sweet. Just sickening.

Craigs solution to the banking crisis, the economy and the future? New team COMPLETELY, and don't let them EVER get this comfortable again! It WILL change the lives of your children and their children for the better. Seriously.

Re-post this on twitter and facebook for me, if you agree. It is time for someone who has seen the backroom at the whorehouse to stand up and say... burn it down. If I am that person... then I am.